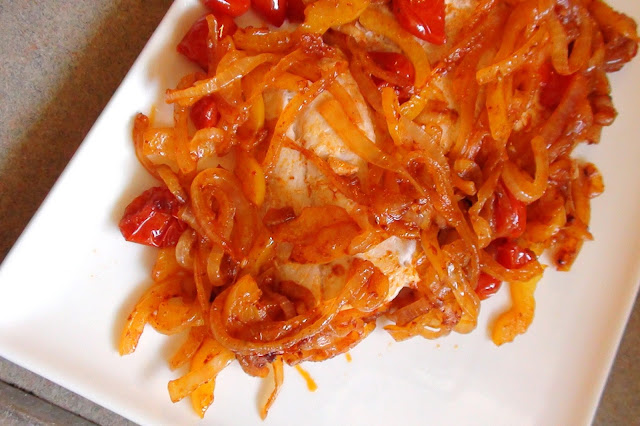 I claim this dish as my own invention; this was the first pink salmon I fully enjoyed that did not just come off the boat. Jim buys dozens of wild pacific pink when they come to town, filets most of them and then freezes the portions for the coming year. The two small filets I prepared last night were from last year’s batch. When it comes to fish, I want freshly caught and preferably sockeye salmon. Very expensive! Last week we ran out of sockeye so here on end we will be having spring salmon until the arrival of this year’s bounty.
I tried to make a salmon paprikás before, but fish taste is not among the things I enjoy so no, there was no repeat of that one. But poaching the fish and then drenching it with paprika sauce turned out to be amazingly tasty. I guess we will be having paprikás lazac until this year’s sockeye catch shows up in the stores.
The paprikás sauce is not really a sauce; it is more of a flavouring. Hungarian cookbooks would call it paprikás zsír or paprika grease and yes there would be substantial amount of lard, oil or butter in it. But with the amount I used here, it doesn’t qualify as paprika grease. Most of the liquid came from the vegetables sweating off their liquid.
2 servings of salmon filets
1 tsp extra virgin olive oil
1 tsp butter
1/2 onion, sliced
1/2 cup cherry tomatoes
1/2 yellow bell pepper, cut into matchstick slices
salt to taste
• Remove the skin from the fish.
• Place in a non stick skillet and cover with cold water.
• Sprinkle with salt and bring to a slow simmer.
• Meanwhile, heat a different non stick skillet.
• Add the oil and the butter.
• When the butter is melted add the sliced onion and sauté on medium heat.
• Sprinkle with salt.
• When the onion wilts, add the tomatoes and crush them with a fork.
• Add the bell pepper and sauté for a couple of minutes.
• The salmon should be ready by now. Remove the salmon with a large slotted spoon and transfer to a heated platter.
• Remove the onion mixture from heat and stir 1 tsp Hungarian paprika into the mixture.
• Scoop the paprika sauce over the fish and serve immediately. 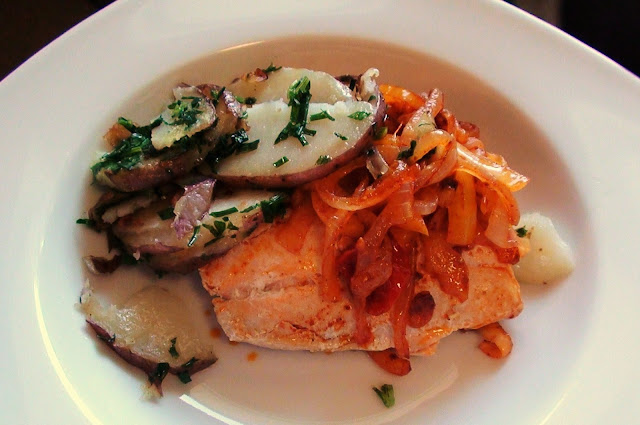