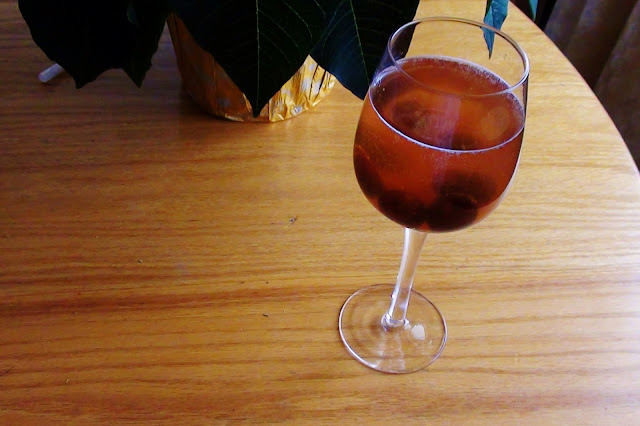 Ah the proverbial bólé! You don’t really need a recipe for it, just throw some juice, fruit and booze together, keep tasting and adding until it tastes just right. The more you work on it the better it should get. Back in the sixties I never attended a house party in without bólé. There was food and dancing and bólé.

It would start with a large bottle of some type of canned fruit and szódavíz. Then someone would sneak a few drops of rum or pálinka into the bowl. As the evening progressed more and more stuff would be added. Keeping the tradition alive I made myself cseresznyebólé. With a mild alcohol allergy I decided to live dangerously just for the day. After all it’s almost New Years Eve! I better cook up a batch of Drunkard Soup for tomorrow. Tomorrow may not be a good day. For your Szilveszter enjoyment I have some videos. BÚÉK! 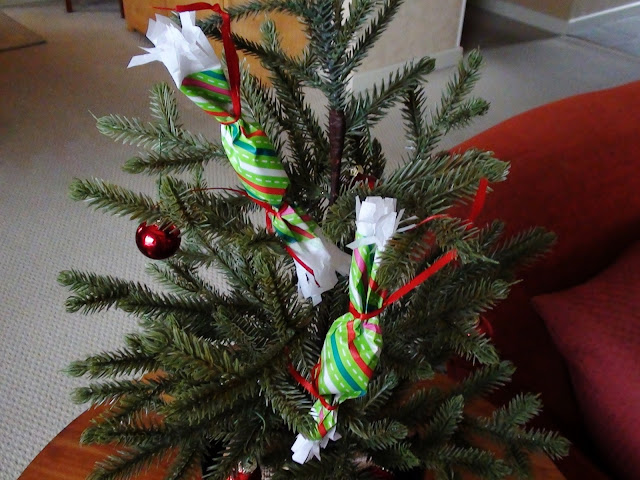 The Christmas tree went up on December 24. All you needed were candles, [colour lights came a bit later] and a box of parlor candy. Shiny baubles and sliver streamers were few. Back in the fifties parlor candy was made from flavored fondant, wrapped in foil and hung on the Christmas tree. They were never meant for eating. Homes without children used to keep them for years. We found that out the hard way. [the fondant would quickly harden into rocks] They were not much better fresh; but we kept sampling them in the hope of finding one with chocolate flavoring. After Christmas Eve desecrated parlor candy began to show up in the oddest of places all the while the empty wrappers remained on the tree. We tried to disguise it by filling the wrappers with tissue, eventually giving up on that too. By the 6th of January our Christmas tree looked like a horde of locusts passed over it.

Sometime in the late sixties chocolate covered bonbons burst on the market, promptly replacing the fondant candies. I saw such a box at the Hungarian Store inVancouver once. I thought about making parlor candy over the years, but it was never a priority. By the time I made the Beigli and the Zserbó and a few Christmas Cookies, I had no desire left for novelty. Come to think of it any bonbon could have been wrapped up as parlor candy and hung on the tree... Well now, this recipe is no different.

This isn't your commercial version of parlor candy either. I wonder how long two dozen homemade parlor candies can last with a couple of senior citizens? We certainly sampled before I wrapped. It was hard to refrain from diving into them as they lay... chocolate slowly solidifying...  I am actually surprised that some made it up the tree. They are delicious! Adapted from Cookpad the recipe makes 24 standard sized parlor candies. Make fewer and they will be too large for the average sized Christmas tree. Mine? Well mine is a minimalist tree. A pair of parlor candies completes the look. Remember to leave the empty wrappers on the tree! 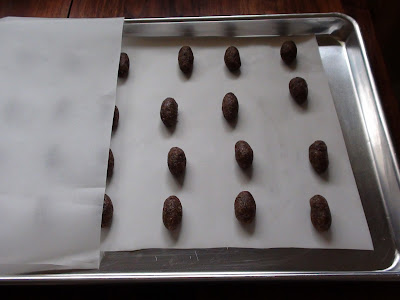 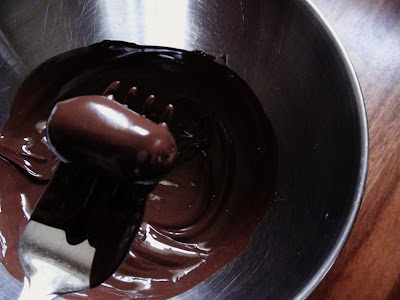 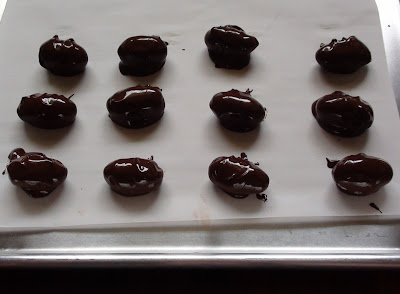 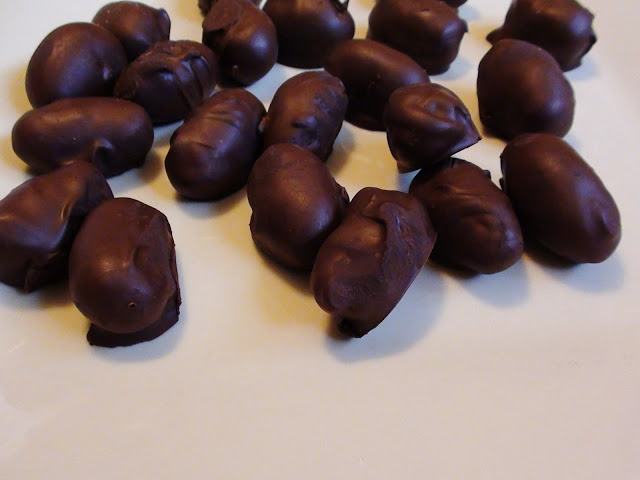 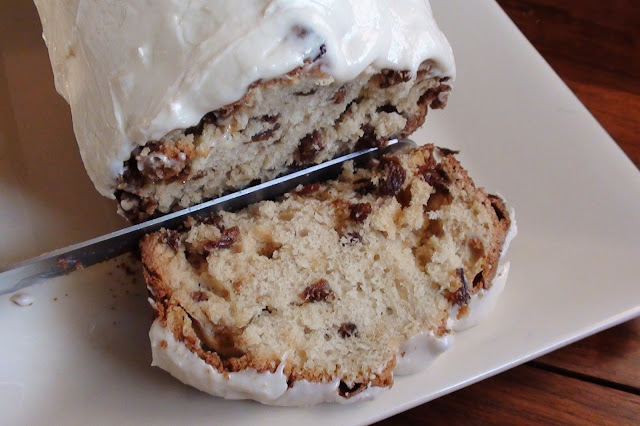 Jim has been eating rum and raisins under less than stellar circumstances. I couldn’t convince him to let me dump them. So when he saw there was a bowl of raisins on the counter he rightfully said “not another one!” How many of us looked at the promise of a recipe only to be disappointed? I keep marveling at the egg stingy loaves and cakes people insist on, but whatever! After several tries of promising delectable rum and raisin loaves I was beginning to think I lost my edge. So I reformulated one of my own recipes for rum and raisins. For sure we are rum and raisined out for now, but this one is a worthy addition to my loaf recipes.

And speaking of eggs… If you have time try to remember to set out the eggs on the counter along with the butter, because room temperature eggs beat up much fluffier than straight out of the fridge. The time that takes draining the plumped up raisins certainly helps. And one more thing! If you set aside 1/4 cup of sugar [from the recipe] for beating up the egg whites you can make a meringue which will be loftier than simply beating the egg whites into hard peaks. These small details will make your cakes’ texture that much lighter and more enjoyable. 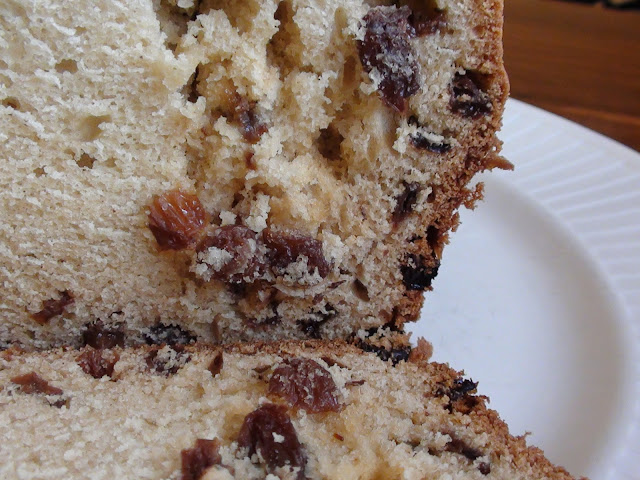 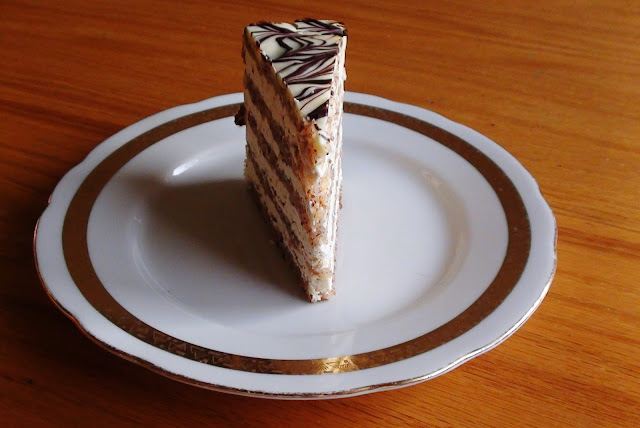 I am going to criticize a national treasure. Don't get me wrong, it worked out just as it should. But as far as culinary indulgences go, I rate it... maybe a four? It makes sense why there are so many versions of it. I would make the Almond Custard Cream again for a buttery cake. For the almond dacquoise, I would add toasted nuts and candied fruits and bake it as a confection. Perhaps I could try a deconstruction... Though I will not make the torte again. A thin slice is nice. But truly worthy things you want to repeat. And just because the Eszterházy Torte has an ostentatious history and requires skill to create, it doesn't make it a great torte. To read about the Eszterházys and the history behind the torte, scroll down to the end of the recipe.*

Here is a chef preparing his interpretation of the Eszterházy Torte. 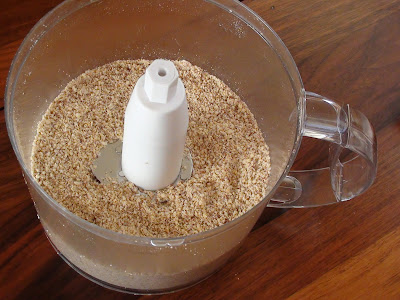 *Many disparate claims have been made about the "true Eszterházy Torte", both by Hungarians and Austrians, but for one reason or another none are exactly like the original. One of the most common deviations is the use of walnuts instead of almonds. Joining all those who made the departure from the authentic Eszterházy, not being a fan of fondant and overly sweet things myself… I too went against the count’s vision… replacing the fondant with white chocolate ganache..

Eszterházy was an aristocratic Magyar family that produced scores of diplomats, army officers, and patrons of the arts. By the 18th century the Eszterházys were the largest landowners in with a private fortune excelling the Habsburg emperors. The family continued to hold important governmental, ecclesiastical, diplomatic, and military positions well into the 20th century. The Eszterházys were fierce patrons of the arts, the composer Joseph Haydn lived with them. The seat of power was in Kismarton, presently in . This wasn’t the only fabulous castle the family kept in . Just how far the Eszterházy influence reached, there is a town in Saskatchewan bearing the name of its founder Count Paul Otto Esterhazy. He must have been an illegitimate or renegade member of the family. His claim to nobility never received official recognition, though he possessed both the talent and the means to establish a thriving Hungarian farming colony in .

One of the Esterházys was Paul, a gastronomer with a score of chefs and kitchen aids at his disposal. The two dishes attributed to him are the Eszterházy Steak and the Torte. The most controversial of course is the torte. According to the Eszterházy letters in Eisenstaedt, the Eszterházy Torte had five layers of almond meringue filled with a combination of vanilla bean infused custard, sweet butter and rum and then finished with a poured fondant and thinly piped chocolate design on the top. I would think you couldn’t possibly have a more authentic source than what remains in the Eszterházy archives. 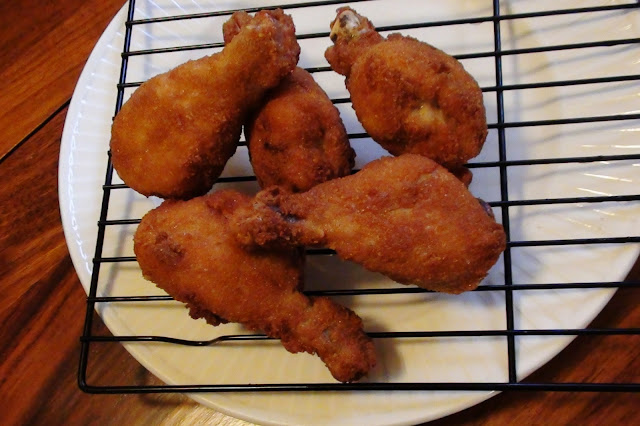 Grandma went to the Garai and bought home two struggling chickens. Their neck was cut and we had fried chicken for dinner. It was delicious.

Nowadays I have to look for happy chickens that ran freely and grew up without growth hormones and antibiotics. Most supermarket chickens come from factory farms and make poor friers. Check out Deboned Breaded Chicken. Numerous recipes advise soaking the chicken in ice water. It’s a bad idea. The meat will constrict and will be tough. Brining tenderizes the meat, cuts down on cooking time and makes the meat succulent. But it will not stop underdeveloped bones from bleeding. Brine if you like; just make sure the meat is brought to room temperature before cooking.

organic, free range chicken breasts and legs with the bone in
oil for frying