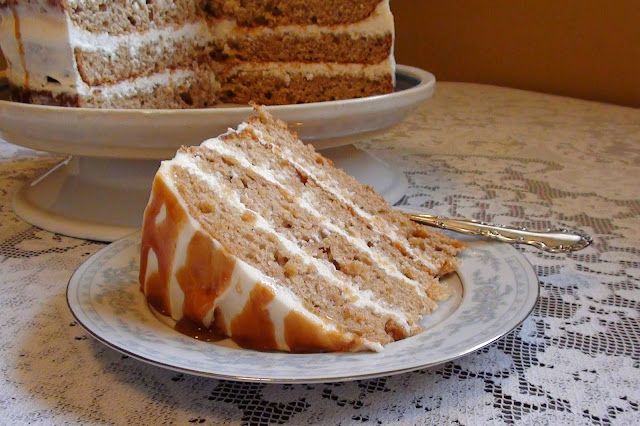 I am looking for the best apple cake and this is the first of several apple cakes I will be making provided the weather holds out. The apples are keeping well in the garden shed for now. But it’s almost December and any day now and the cold spell could come with a vengeance. At that point we will have to bring the apples inside the warm house and make what is left of them into apple sauce. In the meantime, this is my first cake from the experiment. It is a fusion of several recipes and a lot of spur of the moment changes. It unintentionally ended up being a large cake. I strongly advise to place the cake in the fridge for a night. This cake just begs for chilling and resting time. On the first day: The frosting tasted apart from the cake and the icing sugar was very distinctive. The cake itself was too cinnamony, crumbly and it wasn’t a cohesive cake at all. The following day it was a completely different cake. It mellowed and everything came together perfectly. You could taste the components apart and yet they played together in perfect harmony. I took a bite and I thought what a marvellously appointed cake this turned out to be. One last advice, do not reduce the frosting; I had barely enough to fill and cover the cake.
Apple Cake
1/2 cup homemade caramel sauce or commercial
3 large apples
1 cup buttermilk
1/2 cup 14% sour cream
3 -3/4 cups flour
1 Tbsp baking powder
1-1/2 tsp baking soda
1-1/2 tsp cinnamon
1/2 tsp salt
1 cup brown sugar
1/2 cup vegetable oil
1 Tbsp pure vanilla extract
3 eggs
Cream Cheese Frosting
1/2 cup unsalted butter
250 g [8oz] cream cheese
4-1/2 cups icing sugar
2 Tbsp14% sour cream
1 Tbsp pure vanilla extract
1/4 cup caramel sauce for drizzling
• If you make the caramel sauce, make the sauce first and then set it aside to cool.
• Next make the cream cheese frosting.
• Place the butter and the cream cheese in a large mixing bowl and beat on medium speed to combine.
• Gradually add the icing sugar 1/2 cup at a time, beating to incorporate after each addition.
• Add the sour cream.
• Turn the beater to highest speed and beat for 2 minutes.
• Add the vanilla and beat to combine.
• Keep the frosting in the same bowl, wrap and chill until you need it to assemble the cake or minimum 1 hour.
• Next preheat oven to 350 degrees F.
• Peel and core 3 good sized apples and gate them into a bowl. Set aside.
• In a small bowl whisk together the buttermilk and the sour cream and set aside.
• Line the bottom of two 8 inch spring form cake pans with parchment paper.
• Spray the bottom and the sides of the cake pans with cooking spray.
• In a large bowl whisk together the flour, baking powder, baking soda, cinnamon and salt.
• In a separate large bowl, beat the brown sugar and oil together for 1 minute.
• Add the caramel and the vanilla and beat to combine.
• Place the remaining caramel in a heavy zyploc bag, seal and set it aside for use later.
• Add the eggs, one at a time and beating after each addition.
• Squeeze the grated apples and discard the juices or set it aside for some other use. The juice is delicious.
• Add the squeezed out grated apples to the bowl mixing well.
• Set the beater to a lower speed and start adding the flour mixture, half a cup at a time. Beat to combine after each addition.
• As the cake batter gets thicker, start adding from the buttermilk mixture.
• Keep adding from the flour mixture and the buttermilk mixture until all of it is incorporated.
• Divide the batter evenly between the two prepared cake pans.
• Place in the preheated oven and bake for 30 minutes.
• Remove from the oven and place the cake pans on a wire rack to cool.
• When the cake pans cool down a bit, unhook the spring mechanism and lift tha cakes out of the pan.
• Peel the parchment paper off the bottom and place the two cakes on the wire rack to cool.
• Cool the cakes completely.
• With a serrated knife cut both cakes in half horizontally. This is a stable cake so it is not too difficult to cut it into two layers.
• Place the cake layers back on the wire rack if the insides need more time to cool down. Do not attempt to spread with frosting until the cake layers are completely cooled down.
• For frosting the cake, remove frosting from the fridge and re-beat until good spreading consistency.
• Starting with a bottom layer and ending with one of the top layers, spread the cakes with the forting evenly. Keep a little frosting back for the top and the side of the cake.
• Now take the remaining caramel sauce [about 1/4 cup] that you set aside in the zyplic bag.
• With a pair of shears, cut a small corner off the bag. Using the plastic bag as a piping bag, squeeze a circular design on top of the cake.
• Place the cake in the fridge and cover it with a large cake dome or a bowl large enough not to disturb the cake.
• Serve the cake the following day, by that time the flavours settle down and combine into a wonderful harmony.