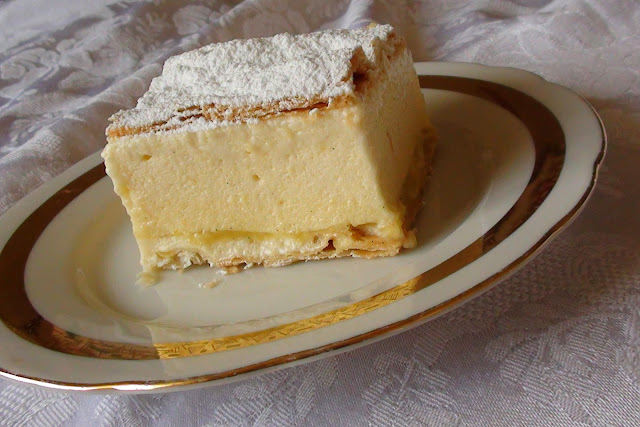 I have recreated the krémes of my childhood. With several years of on and off krémes experiments behind me, I am happy to announce my first batch of successful krémes! Krémes is a classic Hungarian treat. Krémes is made from real vanilla custard; predominantly eggs and milk. It is sandwiched between layers of flaky pastry and then dusted off with a layer of confectionary sugar… krémes is pure delight on all fronts.

I remember two types of krémes; homemade and cukrász. Homemade krémes was delicious, fairly flat with runny yellow cream between 2 layers of flaky pastry. The cukrász krémes was not quite as yellow; but was tall and light and most likely had some gelatine in its custard layer. I especially loved Hauer’s krémes! Hauer was the original name of the coffeehouse, but it went by a different name during the communist era. Was it Erkel? I don’t remember. Besides my family kept referring to it as Hauer, the name change [actually the coffeehouse was privatized] was just one of the many things communism was resented for.

Go back yet another twenty four years, exactly four years before I was born. The war just ended. Budapest was bombed to hell and the people were hungry, very hungry. In desperation for some cash my great aunt, Olgi néni saved her food stamps and managed to bake a tiny pan of krémes. She packed it up and took it down to the corner of Rákóczi út and Szövetség utca to sell. Along came a bedraggled Hungarian soldier, just back from the front, and grabbed the pan out of her hands. He sat down on the pavement and polished down the entire pan. He then wiped his face on his sleeves and gave the empty pan back to my weeping aunt. Of course he didn’t pay for it, how could he? When I heard this story, I didn’t know who to feel sorrier for, my aunt or that soldier. So you see krémes imbedded itself into my family history in a variety of ways.

• Make the vanilla infused milk first.
• Heat the milk in a saucepan.
• Scrape the seeds from the vanilla bean into the milk with a paring knife, and add the bean pod to the milk.
• Cover, remove from heat, and infuse for one hour.
• Next make the flaky pastry.

• In a large bowl crumble the flour and the chilled margarine to fine crumbs.
• Mix in the salt.
• Place the cold water and the vinegar in a small dish.
• Pour the liquid over the pastry crumbs.
• Stir to combine and gradually form a rough ball.
• Generously flour a board and roll out the pastry into a thin rectangle.
• Roll up the pastry and divide into 4 parts.
• Roll each division into a thin rectangle.
• Stack the four rectangles on top of one another.
• Chill for twenty minutes.
• Divide the chilled pastry into two equal halves.
• Roll out the first pastry very thin.
• Fold it in half and place the folded edge in the middle of the 9X13 baking pan.
• Unfold and arrange the pastry with deep folds as in the photo.
• Let the dough go up the sides halfway, pastry will shrink during baking.
• Place in a preheated 400F oven for 14-18 minutes.
• Keep a watch, pastry burns easily.
• When the pastry is golden brown, remove pan from the oven.
• Immediately cut pastry into twelve squares.
• Divide the long side by 4 and the short side by 3.
• Wait a few minutes and very carefully remove the squares and set them aside in the same order as they were in the pan. These will go on the top later.
• Roll out the remaining dough and arrange it in the baking pan as before.
• Bake the second pastry sheet and set it aside. This will be the bottom of the krémes.
• Next make the custard layer.

• In a medium sized bowl beat the egg yolks and 1/2 cup sugar for 8 minutes
• In a separate bowl whisk together the flour, gelatine and the vanilla sugar.
• Gradually add the flour mixture to the beaten egg yolks and beat until smooth.
• Remove the vanilla pods from the vanilla infused milk.
• Gradually add the vanilla infused milk to the bowl with the eggs and the flour.
• Transfer custard to a medium sized pot.
• Attach the candy thermometer to the side of the pot so you can keep an eye on the temperature.
• Over medium heat and continually stirring heat the custard.
• Do not let custard heat beyond 80C [176F] for this recipe.
• When the custard reached 80C remove from heat.
• Stir in the butter and set aside.
• While the custard is cooling whip the egg whites.
• With clean beaters beat the egg whites until soft peaks form.
• Add the lemon juice and beat until almost stiff.
• Add 1/2 cup sugar and beat until very stiff and shiny.
• Very slowly and gradually, gently fold the custard into the stiff egg whites.
• Pour on top of the bottom pastry layer and place in the fridge.
• Make sure the pan is level on the shelf.
• When the gelatine is beginning to set, place the pastry squares on the top.
• Let the krémes chill thoroughly.
• Before serving generously sift icing sugar on the top.
• Cut the slices between the pastry squares. 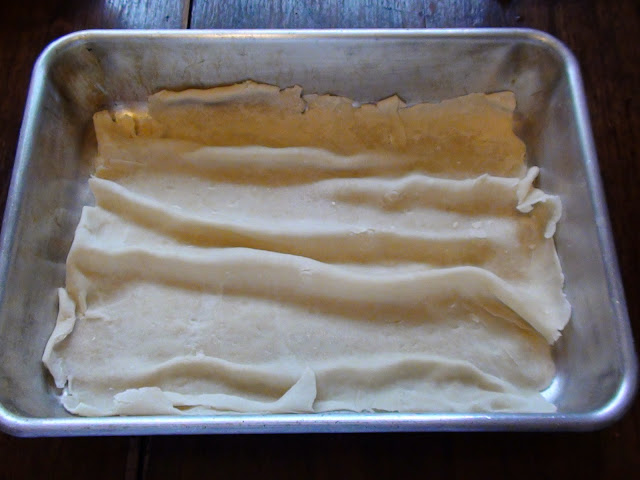 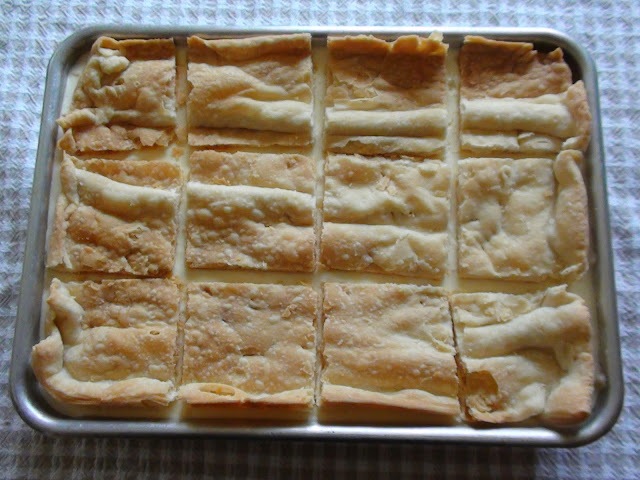 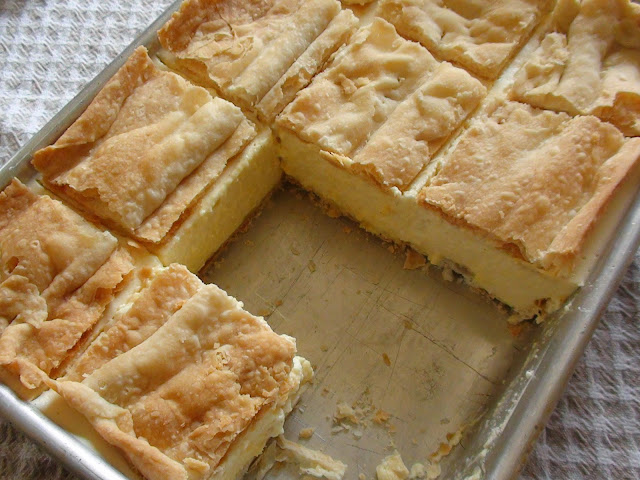