With aunts, uncles and two of my cousins [ I am the kid in the middle] 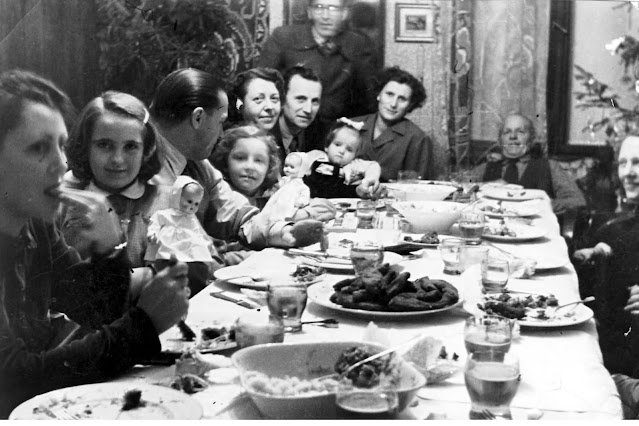 With aunts, uncles and two of my cousins [ I am the kid in the middle]
In , Santa's big day is December 6th. Christmas gift giving have always been the job of the blond, curly haired baby Jesus and his angels. I couldn’t understand how the communists handled Santa coming twice in one month. By dusk on December 24th the streets of would fill up with grandparents and grandchildren. It was a touching scene. Meanwhile the parents were feverishly decorating the tree at home and placing unwrapped presents under it. One year we arrived a bit too early to find empty bags and boxes on the couch. Without looking under the tree I ran to the empty boxes first, touching them reverently and thinking the baby Jesus and the angels just handled these.

As magical as my own Christmas Eves were it made no sense to isolate our kids. The baby Jesus and the angels had to go and Santa became the man. Susie, Peter and Leilah had no doting grandparents or fun loving aunts and uncles around. Sometimes a parcel would arrive from , but we couldn’t count on it. We had to compensate and Christmas broke us every year.  Jim would walk the kids up the street looking at Christmas lights. On top of the hill, there was a red light blinking away 365 days a year, but on Christmas Eve, it was Rudolph's red nose. Once I put the last package under the tree, I opened up the front door and yelled “Come quick you are going to miss Santa!” They ran home, but darn, Santa was always gone by the time they fell through the front door. The Christmas Eve magic lived on.
Food took some minor adjustments too. Breaded carp steaks were the traditional fare, but I refused to eat fish and by the age of ten, my parents gave up trying to convince me how good it was. Finally one year I had my breaded pork cutlets while everybody else ate fish. The nun who thought me catechism wanted to leave within the first hour. I had some ethical objections so she went to my Dad that I was a born heretic. Dad told her I was only six and it was her job to teach me. Like so many things the Christmas tradition of breaded pork cutlets I had to fight for. Jim had no expectations, as long as I fed him, so my "tradition'" went unchallenged. Sometimes I fry up a few slices of fresh halibut just for the heck of it, but for the most part we stick to breaded pork cutlets. Everything else I kept, the hot purple cabbage salad and the larded potatoes. The coulibiac is a Russian dish, very festive, it is in case someone in the family insists on fish. Desserts and cookies change year to year, there are so many wonderful cookies, traditional Hungarian Christmas Baking is limited by comparison. Jim still wants beigli, he has been breaking the walnuts since October. I haven't had the time to bake yet, maybe on the weekend I will get to it. My great aunt Lizi was an exceptionally good cook. She was the one who thought me to make beigli, which was better than my grandmother's. Unfortunately I never tasted my mother's, she only cooked after Nagymama died and our visits home were timed for the summer holidays. 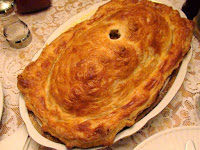