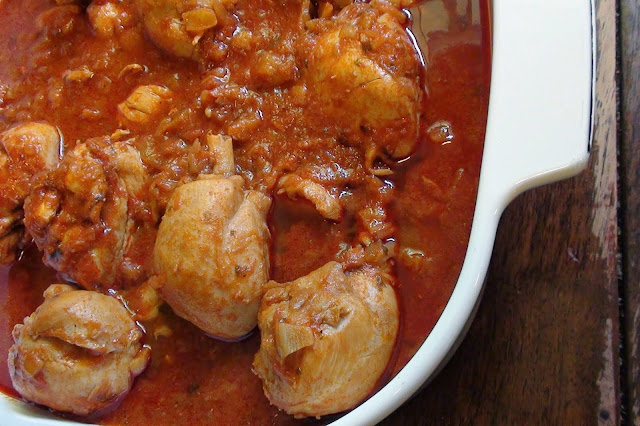 The first thing is the fat. Authentic chicken paprika is cooked with lard. Yes it tastes better with lard, but not the kind you get in North America, so forget the lard. Besides at one point even my “Pesti” mother [we lived on the Pest side of Budapest] started to use oil instead of lard, she said it was better for you. These days I use olive oil in most of my cooking and a whole lot less of it than my mother used to. The other thing is how you cook the chicken. Authentic chicken paprika is cooked on the stove entirely, but you can’t make authentic chicken paprika without freshly slaughtered free range chickens. However baking the chicken in the oven part of the way brings great improvement to supermarket chicken. One thing you can’t get around is the paprika thing. You must have Hungarian paprika; you can’t make paprikás csirke without it.
breasts and legs of 1 chicken
1 onion
2 garlic cloves, minced
2-3Tbsp olive oil
3Tbsp Hungarian Paprika
salt and pepper to taste
1/4 tsp caraway seeds
1 cup of tomatoes, diced [fresh or canned]
2 cups yellow peppers, diced [if available Hungarian]
1 cup water
sour cream

• Wash and cut up the chicken.
• Cut the breasts in half.
• Cut the chicken legs in half.
• Chop off the bony end of the drumsticks and reserve for stock.
• Remove all the skin and fatty bits and discard.
• For lower the fat content remove the breast bones. Save the bones for stock.
• Peel and dice the onion.
• In a medium pot slowly sauté the onions in olive oil until translucent.
• Add the chicken pieces and slowly cook them for a couple minutes to seer in the juices.
• Stir in the paprika.
• Season the chicken with salt, pepper and caraway seeds. [No, you won’t even know they are in there]
• Add the tomatoes and stir in the peppers.
• Add the water and bring to boil.
• Reduce heat, cover with a lid and slowly simmer for a few minutes.
• Meanwhile turn the oven on at 350F.
• When oven is the right temperature remove the lid and place pot in the oven.
• Bake until meat is tender.
• Remove from the oven and serve with nokedli and sour cream.


Just before placing in the oven 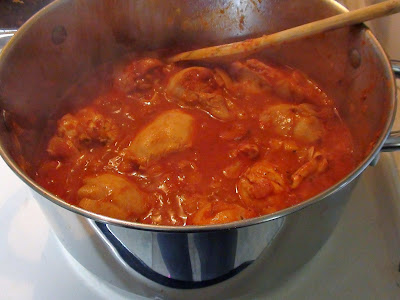