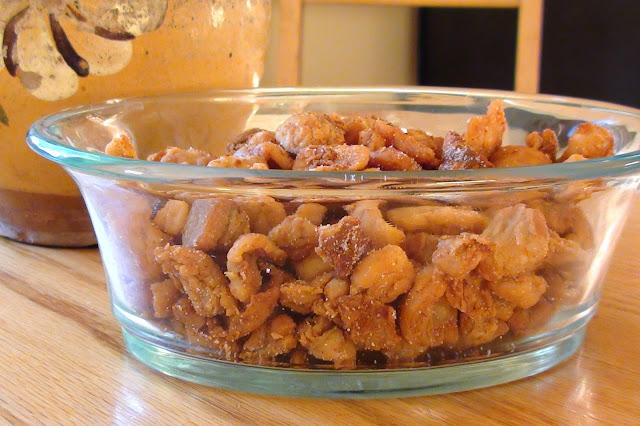 Töpörtyű or tepertő, begins with thick slabs of pork fat. Töpörtyű used to be the wonderful by-product of lard making in Hungary – before cooking with vegetable oil took over. Food tastes better with lard; there is no question about it. But for health reasons lard making has been relegated to "disznótor" [the slaughter of pigs]. In Hungary you can still buy töpörtyű in the grocery store or at the butcher. The thick slabs of raw fat – which makes the best töpörtyű are not readily available in Canada, so one has to be a bit inventive.
The secret of töpörtyű making is simple. Cook it real slow, start the cooking with water and add a bit of milk at the end. By the time the water evaporates, enough fat is melted down to ensure an evenly browned product. And when the töpörtyű is nice golden in color, pour in a bit of milk and cover the pot. This will ensure that the töpörtyű will be both crispy and tender. How much water or milk to add depends on the amount of pork used. I go by feeling, but eventually I will fine tune the recipe.
pork fat
water
1/8 cup milk

• Chop the pork fat into 1-inch cubes and place them in a heavy pot.
• Cover the pork fat with water and bring it to the boil.
• Reduce heat to medium and cook until tender, adding water if needed.
• When the pork fat is tender; turn the heat down to a slow simmer.
• By the time the töpörtyű is tender, there should be enough melted fat to continue frying the töpörtyű.
• Let it fry to a golden color.
• When the töpörtyű is a nice golden brown color, add the milk, cover the pot and remove from heat.
• If you added too much milk just place the pot back on the heat and slowly let the milk cook away. What you want left is lard and töpörtyű only.
• When the sizzling stops remove the töpörtyű with a slotted spoon and place it on a paper towel to drain.
• Sprinkle the töpörtyű with salt immediately.
• Strain the hot lard through a fine metal sieve and store it in a glass container with a well fitting lid.
Posted by Zsuzsa at 15:18