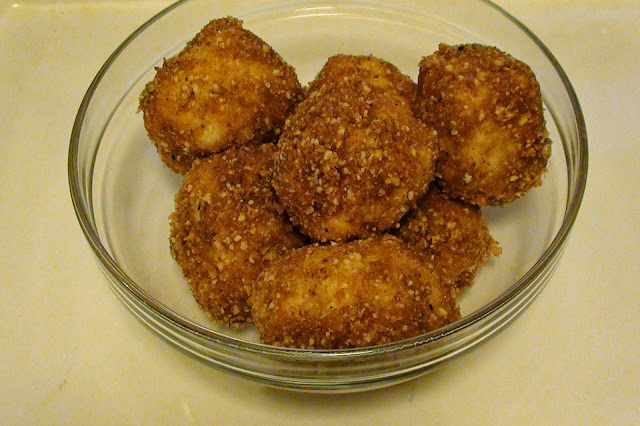 It's plum time again! I had a fairly large recipe for Hungarian plum dumplings and rather than dealing with several days of leftovers, I recalculated the recipe for two people. It is easier to double or even triple the recipe should larger quantities be required. I made the dumplings by sight and as I made them I measured out the ingredients.

I also wanted to add a few pointers, because there are a number of things to keep in mind when making the potato based dough for Hungarian szilvásgombóc. It is most important to keep water absorption to the minimum. So always use red potatoes. Baking potatoes are not suitable for this dish; they absorb too much water and besides they have a tendency to fall apart if cooked in whole, yet more water will be soaked up. So always use the red. For the exact same reason cook the potatoes in their skins. Peeling and chopping the potatoes will increase their surface area and that too will increase water absorption. So cook the potatoes in whole. Recipes keep repeating to add the flour while the potatoes are still warm. This is wrong. Once again warm potatoes soak up the flour and the additional flour that will be required will change the overall texture of your potato dough and not for the better. So let the potatoes cool down completely before adding the rest of the ingredients. The dough will still be a bit sticky, so wrap it up and chill it for a half an hour to an hour before rolling it out. Follow my recipe and you will always have beautiful szilvásgombóc.

• Cook the potatoes in their jackets.
• Next wash the plums, cut them in half, removing the stones.
• Prepare the cinnamon sugar for the plums.
• In a small bowl combine 1/4 cup of brown sugar with a sprinkling of cinnamon.
[Do not douse with cinnamon; these dumplings are best with just a hint of cinnamon.]
• Add the plums and shake to coat. Set aside.
• Next prepare the crumb mixture.
• Place the butter in a non stick skillet over medium heat.
• Add the bread crumbs, ground walnuts, stirring frequently, until crumbs are golden and crisp.
• Stir in the finely ground walnuts and brown sugar.
• Remove the crumbs from heat and set aside.
• When the potatoes are tender, pour off the water and set them aside.
• Let the potatoes cool completely.
• Peel the potatoes and finely grate them.
• Mix in the soft butter and then add the egg, the flour, and the salt
• Mix to combine.
• On a floured surface kneed the dough lightly.
• Dough will be a bit sticky, so wrap in plastic and place in the fridge to chill for 30 minutes.
• When dough is chilled, roll it out on a well floured surface to 1/2 inch thickness.
• Cut into six 2-1/2 inch squares.
• Place a plum in the middle of each square.
• Pinch the dough to enclose the fruit.
• Make sure to seal the dough encasing the plums and roll into balls.
• Boil a large pot of water and gently slide in the dumplings.
• With a fork gently loosen dumplings from the bottom of the pot.
• Gently simmer dumplings until they float to the top.
• Pour the breadcrumb coating into a medium sized, deep, round bowl.
• One by one, remove the cooked dumplings with a slotted spoon and place it in the bowl with the breadcrumbs.
• Gently shake the dumplings around the bowl to coat.
• Make sure to place the dumpling in the breadcrumb coating as soon as they come out of the boiling water or the breadcrumbs will not stick. 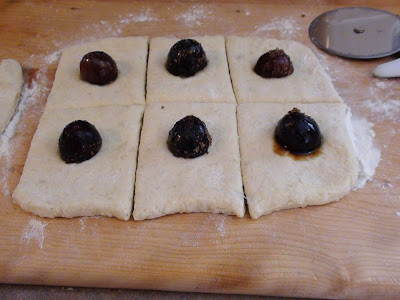 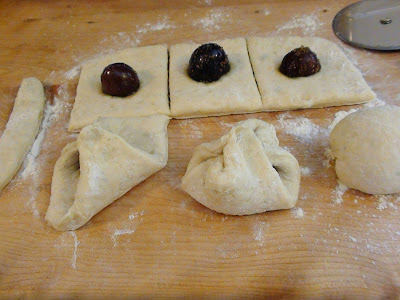 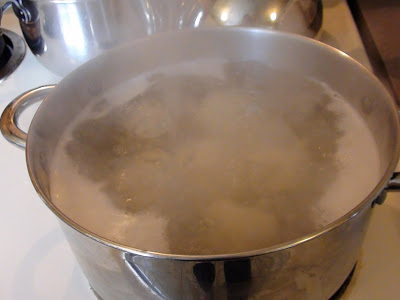 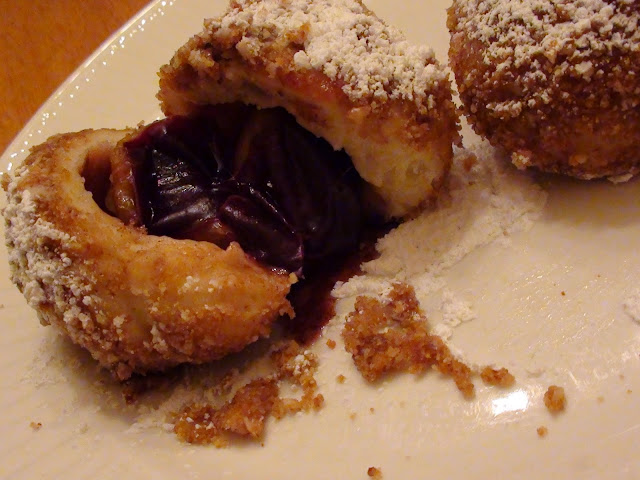