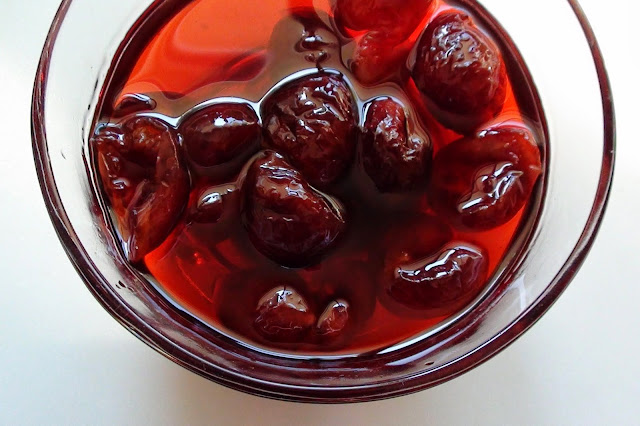 I never made rum cherries before. People write about it as an easy thing to make, but no, it isn’t easy. One of the problems I encountered was not having the same kind of preservative they use in Hungary. So I set up several very small experiments, rum being expensive and all. Two went bad, two other batches worked, but the cherries either shrivelled up or lost their color. [All of these following recipes] The last batch I made on my own and finally success! It’s been ready for awhile; I already used half of it for the Russian cake last weekend. The minuscule amount that remains I poured into a sterilized jar, covered it and put it in the back of the fridge until Christmas. It will be used in a Christmas trifle. What people fail to mention is the fairly large amount of cherry liquor that is the by product of making rum cherries. I am not saying it’s a bad thing. But we shall see if it remains as is, or if it ends up fermenting onto my liqueur cabinet.

The cherries must not be allowed to ferment; as soon as these white bubbles appear on the top: action is required. [I added more citric acid, twice] The citric acid I used came from a U Brew Wine store. “Fruitfresh” is also citric acid, but I don’t think it’s the same as what the wine stores sell. So that is the first thing, get a small package of citric acid from the wine store. Some people advised to use 54-56% rum. Rum sold in B.C. has 40% alcohol content, and that is plenty strong for us. Besides I didn’t want to end up with so much alcohol as not to taste the cherries; I had those before. Might as well just drink the booze and forget about the cherries

The next important thing is to remove all the pits. [In the batch with the pits the cherries shrivelled into tough wrinkled balls] The cherries in bottles all turned brown. So the final thing is put the cherries into a blemish free enamel pot or a fully glazed pottery crock or casserole dish. Don’t use stainless steel or aluminum, but keep the cherries fully covered and in the dark. I don’t think I have to say it, but I will say it anyway. Use only flawless cherries and make sure everything you use to make the rum cherries is very, very clean. Avoid stirring or tasting; I just jiggled the crock a few times, this too can reduce the risk of contamination.

• Wash the cherries and let them drain.
• Remove stems and the pith.
• Drain well.
• Put a layer of cherries in the pot.
• Sprinkle with 1 Tbsp of Fruitfresh
• Cover with some sugar.
• Continue layering cherries, then with Fruitfresh and finally with sugar until all the cherries are gone.
• Cover the pot and let cherries rest for 3 days. Cherries will release a lot of liquid.
• On the third day top off the cherries with rum.
• .Add 3 Tbsp of citric acid.
• Cover the pot and keep checking the cherries daily. As soon as white bubbles appear add 1-2 Tbsp of citric acid.
• In two to three weeks the cherries will be ready for consumption.
• Pour into sterilized jars and place jars in the fridge. I estimate it will be good for six months or so.
• Pour the access rum cherry liqueur in a clean bottle and place it in the liqueur cabinet. You will know what to do.
• Rum cherries are excellent for cake decorating, puddings, ice cream, cakes, pastries and cocktail drinks. 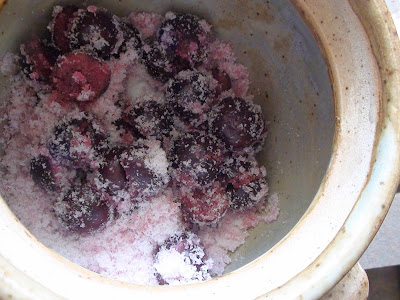 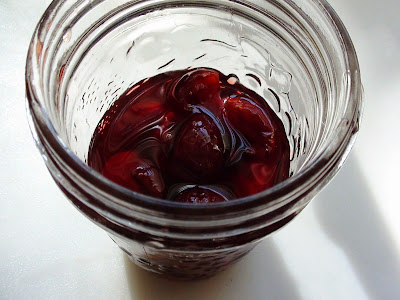