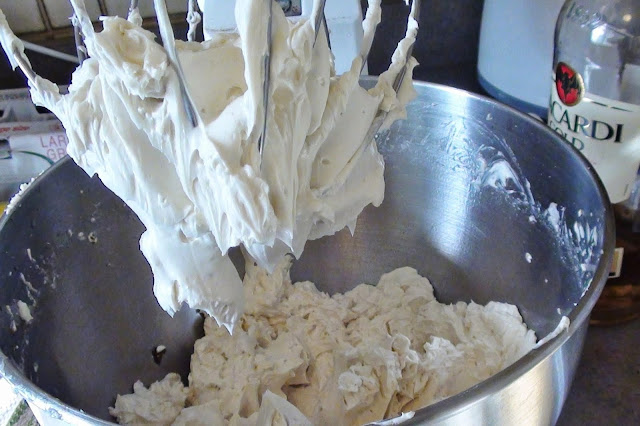 This is not the easiest buttercream to make, but the result is well worth the effort it requires. I would not attempt this without a candy thermometer. If you have one of those medium saucepans with a pouring spout, it will be of great help. If not, pour it from the same pot the caramel was cooked in. If you transfer it to another vessel for easier pouring, it will cool it down too fast and a lot of the caramel will solidify before you have a chance to incorporate it into the beaten egg whites. Beat the eggs to a soft peak stage first, before starting to cook the caramel.
5 egg whites
1-1/4 cups packed brown sugar
1/4 cup water
2 cups unsalted butter, at room temperature and cut into cubes. Make sure the butter is not too soft and not too cold!
2 Tbsp rum
• Beat the egg whites in the bowl of an electric mixer until soft peaks form, and set it aside.
• In a medium saucepan, combine the water and the brown sugar.
• Bring it to a boil on low heat, stirring occasionally.
• Once it reaches a boil, stop stirring and add a candy thermometer.
• Continue to cook the sugar slowly until it reaches 238 degrees F, or the soft ball stage.
• Once the caramel is ready, slowly add it to the egg whites while the mixer is on medium speed. Be careful to pour the sugar in a small steady stream without letting it hit the side of the bowl or the beaters.
• Once the caramel is all incorporated, increase the speed to medium high and beat the mixture until it cools down to room temperature.
• Begin to add the butter a tablespoon at a time while the mixer is still on medium high. • Once all the butter is added, continue to beat until smooth.
• Note: before the butter is fully incorporated, it will look as if the icing separated.
• But keep beating on medium high and it should come together, even though it may take several minutes.
• Beat in the rum.
• Spread this icing on the cake immediately.
• Makes 5 cups