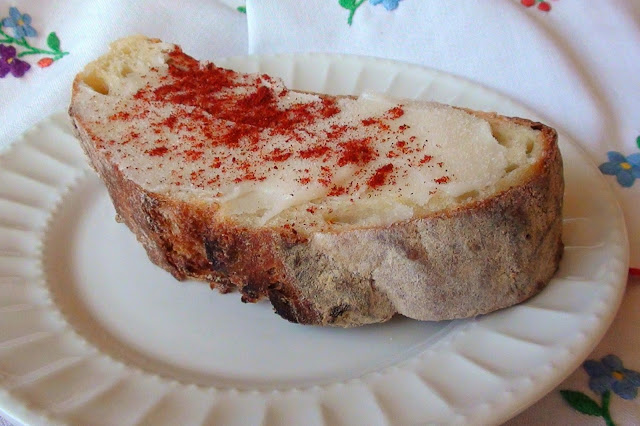 If you are North American, don’t read any further. Because if that’s the case you simply cannot relate to a good slice of zsíros kenyér. You have to be Hungarian or at least Hungarian descent to appreciate the true magnitude of this meal. I have been looking at a tub of good homemade lard, from my last excursion into töpörtyű making, and waiting for an opportunity to have me a slice of zsíros kenyér. I haven’t had the time or the inclination of late to make one of my homey breads, so when Joe, my youngest daughter’s Italian father in-law brought us two wonderful loaves of Pao de Casa bread from the Westview Bakery in North Vancouver I thought the time has finally arrived. Judging by the name, this has to be a Spanish homey bread of sorts. Jim and I each had a slice from it last night after we got home from the ballet, and then this morning I thought I finally can have my zsíros kenyér from a slice of bread Joe brought for us. Being European, Joe knows the importance of good bread. So I had me a good slice. Had it been a vacsora or a tízórai, I would have had it with a dill pickle. I could never have it with raw onion, except maybe with a couple of green onions. That is because we didn’t eat it with raw onions in Budapest. So there you have it, this is the zsíros kenyér and every Hungarian should be well acquainted with it.
good rustic bread
homemade lard
salt
Hungarian paprika

• Spread a hunky slice of rustic bread with homemade lard. Do not attempt this feat with store bought lard.
• Sprinkle it with salt and authentic Hungarian paprika. 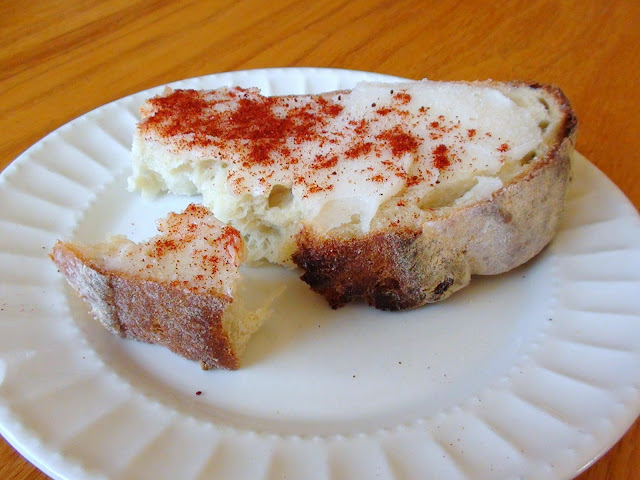