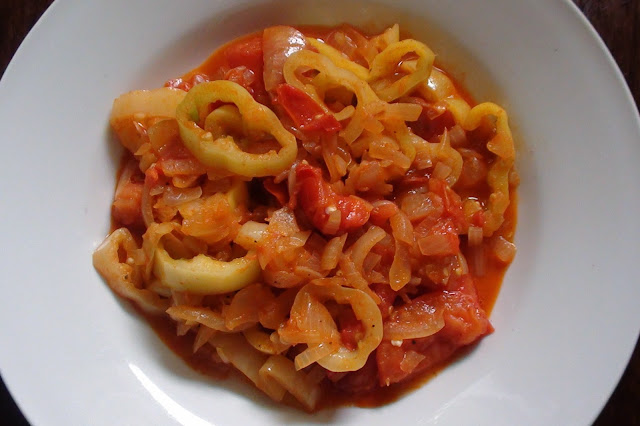 I came to the conclusion that nobody makes good lecsó outside of Hungary. It may have something to do with reasoning out most of the onions or the first "authentic" Hungarian recipe collection online and the copycat recipes that followed. But there it is... limp pepper chunks swimming in mouth puckeringly sour, thin broth with the excuse that "it's my version" or because "aunt Edith from Pittsburg always made it like this". Way to ruin a wonderful, iconic dish. Forget those recipes. This is how you make authentic Hungarian lecsó.

You need fleshy yellow Hungarian wax peppers, fully ripe tomatoes and lots of sweet onions.  Jim grows them giving me a few weeks of lecsó making opportunity. Keep in mind that no Hungarian pepper grown in our Kamloops garden can come close to the peppers grown in Hungarian soil. Of course most North Americans don’t even know what Hungarian peppers look like except for the tiny hot things selling in the supermarket. But those aren’t Hungarian peppers. Moving onto the tomatoes, the sweetest of tomatoes, are the round vine ripened varieties. They cost a bit more, but their flavour is superior even when in season. I have been trying to break through the availability barrier and to come up with a year around version of Hungarian lecsó, but that will be a different recipe.

In terms of volume ratio, I tend to use 1/3 tomatoes to 2/3 peppers. Using equal amounts is the first mistake. Not enough onions is the second. Onions give body to stews and in lecsó they bind the peppers and tomatoes together. Hungarian recipe wannabes are notorious for  underestimating the onion content of lecsó. This not only results in soupy consistency, the flavour and the aroma of the lecsó is altered. The natural sweetness of onions should bring sweetness to lecsó, not sugar. For every 6 Hungarian wax peppers and 5 medium size tomatoes use 2 LARGE onions. That's a lot of onions in a dish, but lecsó needs it. I also add Hungarian paprika, but only a  teaspoon or so. Hungarian Lecsó is not about paprika. You can certainly serve lecsó with sour cream, yes I have seen this, one of my granddaughters eats french fries with ice cream, but that is where the idea of lecsó with sour cream belongs... among the weird and the wonderful. 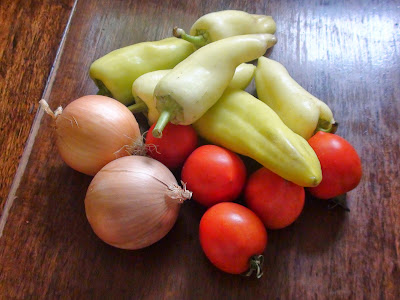 • Chop the peppers into strips.
• Chop the tomatoes, removing the green centers.
• Dice the onions into large bits, but don’t cut them too fine.
• Place 3 Tbsp olive oil in the pot on medium heat.
• Add the onions and garlic and sauté until onions are soft, but not brown.
• Reduce the heat and add the peppers.
• Add the salt and the pepper now.
• Cover and simmer, stirring occasionally for a 3-5 minutes.
• Add the tomato and the Hungarian paprika.
• Simmer uncovered for 1-2 minutes.
• Serve with rustic white bread.
Yields: 2 servings

*In terms of flavour, the yellow bells are the closest to the Hungarian wax. The smallest they are the better, the big ones release too much liquid and they tend to finish up soggy. 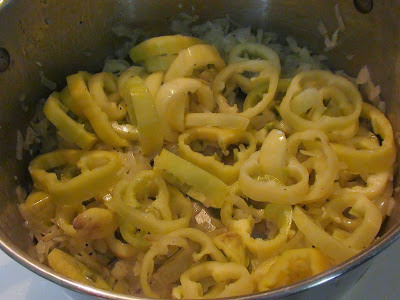 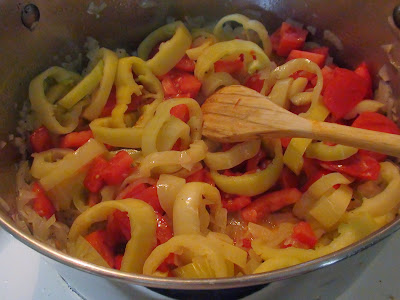 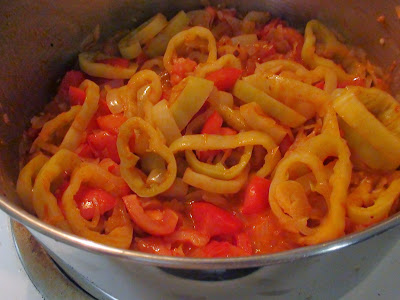 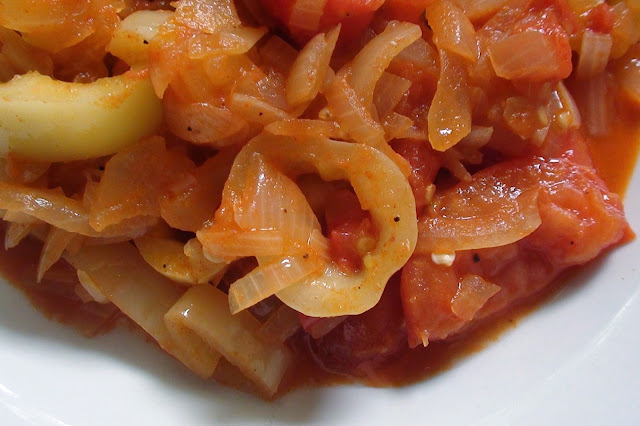