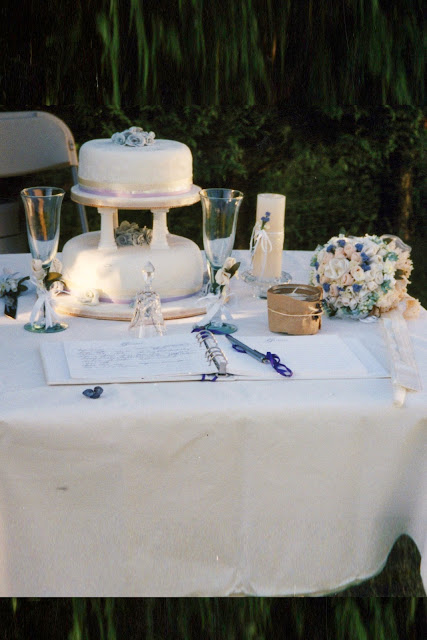 I made this baumkuchen cake for our Susie’s wedding back in 1997. The groom’s part German heritage inspired it, plus the fact that we had to transport the cake on a very hot August weekend from Kamloops to Abbotsford and then to the reception that was held in a backyard. The kids wanted a pot luck reception and thought the whole spread will just magically appear on the tables. But just as I thought, there would not have been magic without yours truly or friend Ann Eggleton. What crazy things one is willing to do for one’s kid will never cease to amaze me.
The groom’s cake on the top was a Traditional Plum Cake [rich fruitcake], and the bride’s cake [the bottom tier], was the Baumkuchen. The recipes for the Traditional Plum Cake, the Baumkuchen, the Apricot Glaze, the Marzipan, the Sugar Paste and the sugar paste flowers that I used all came from Barbara Maher’s “Ultimate Cake” book, more specifically from the instructions to her Traditional Wedding Cake. Maher’s was a three tiered wedding cake, but I only made two tiers. Included is the recipe for a 9 inch Baumkuchen. 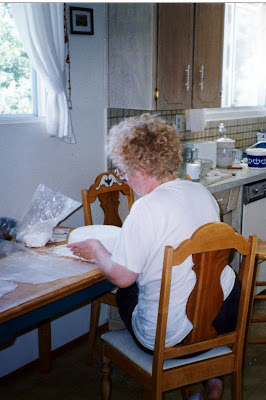 Working on the sugar paste 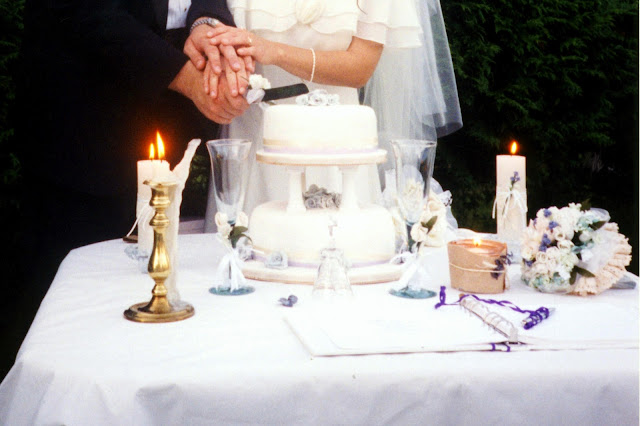 • Make the cake in two layers, using a 7-egg mixture for each layer.
• To prepare a 9 inch cake pan, butter and flour the base.
• Beat 1 cup of butter, half the vanilla, half the lemon zest, and 1-1/8 cups sugar together until pale and fluffy.
• Beat in 7 egg yolks, one at the time.
• Sift together half each of the flour and the potato starch.
• Gradually beat in until well combined.
• In another bowl whisk the egg whites into soft peaks.
• Stir in2 large spoonfuls, and then carefully fold in the rest.
• Preheat the broiler to high.
• Spread 6 Tbsp of the mixture over the base of the prepared cake pan.
• Broil for 2-3 minutes until golden and cooked through.
• Remove pan, cover with another layer of mixture.
• Broil for 2-3 minutes.
• After 3-4 layers, you will be able to spread the mixture more thinly.
• Continue using 4 Tbsp of mixture for each layer.
• Remove the cake from the pan and let cool on wire rack.
• Repeat to make the second layer.
• Baumkuchen cake can be finished with lemon or chocolate glaze.