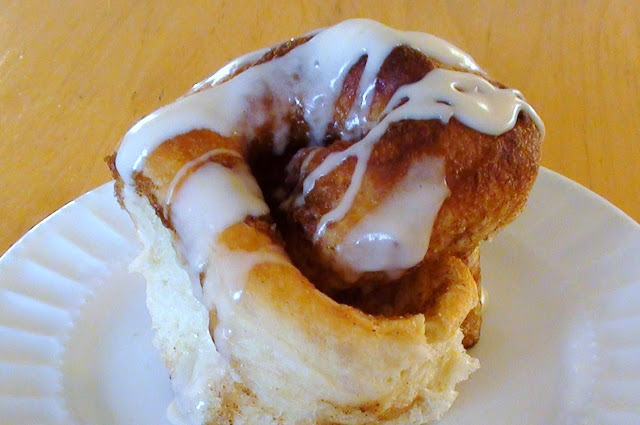 Fluffy, light cinnamon rolls with cream cheese frosting. Proofing is unnecessary if you use instant yeast. With everything at room temperature, the dough rises quickly. These cinnamon buns are so light and fluffy; they will be flopping all over the place when you put them in the pan. Lacking uniform spirals is a small trade off for these fluffy wonders! The cream cheese topping makes a generous amount. I tend to cut it in half and extend it with a little milk or light cream. Then instead of spreading it, I drizzle some on the rolls before serving. Today I only made a simple sugar glaze from icing sugar and whipping cream for a very discerning eight year old. Plus I had to loose the raisins.

• Measure out your ingredients first with the half cup sweep method..
• In a large bowl, whisk together 2 cups flour, 1/4 cup wheat gluten, 2 Tbsp instant dry yeast and 1/2 tsp of the salt
• In small bowls melt the butter and lightly heat the milk.
• In a medium sized bowl, whisk 3 eggs to combine the yolks with the whites.
• Add the lukewarm milk and then the melted butter and whisk to combine.
• Add the egg mixture to the dry ingredients.
• Add the vinegar and beat dough for three minutes on high speed.
• Start adding the remaining flour, half a cup at the time.
• Fully incorporate flour into the dough.
• Keep adding half a cup of flour to the dough until the last half a cup.
• Add only as much flour as needed to make light almost sticky dough.
• Pour the remaining flour on the board.
• Start kneading incorporating only as much flour into the dough only as necessary.
• Shape into a ball.
• Place in a greased bowl, turning once.
• Meanwhile prepare the cinnamon filling.
• Combine filling ingredients.
• Pat and roll into a rectangle and spread it end to end evenly with the cinnamon filling.
• Beginning at the edge furthest from you, begin to roll up the square.
• Cut into twelve pieces.
• Place on a parchment lined and buttered pan, cut side up.
• Brush the surface with melted butter.
• Preheat the oven to 350F.
• After they doubled, bake them until light golden brown. 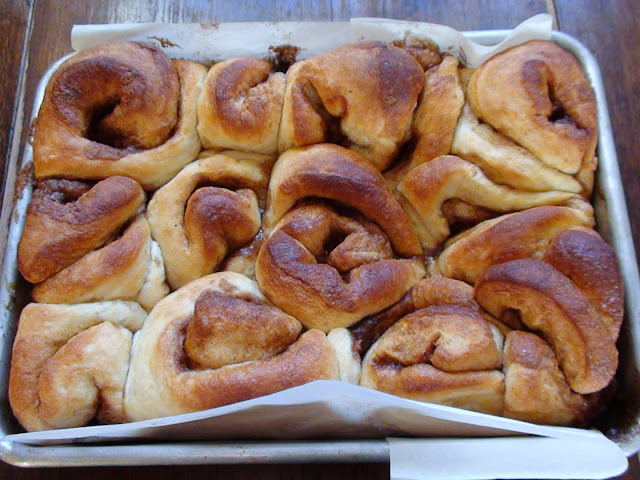