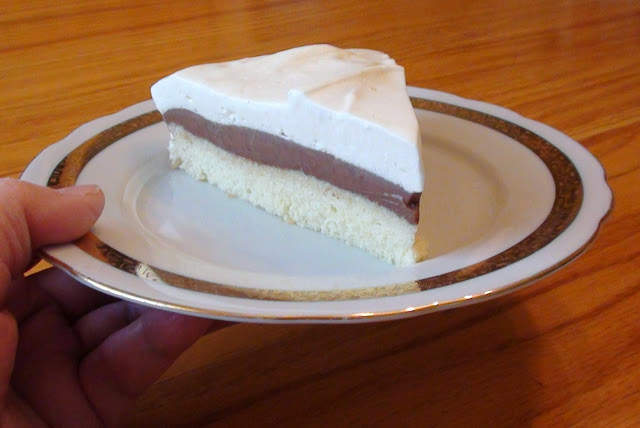 We all keep recipes intending to make them one day and then forget about them. I have been shuffling this recipe from one place to another for the past 45 years. Every time I see it, I decide I will make it soon. When my husband and I got back from our honeymoon in 1967, we went down to Siklós for a visit. That’s where the other branch of the Vári family lived. Before we left Irma néném handed me two recipes. This was one of them. Today I felt nostalgic enough and thought it was time I made this recipe or it could be forever lost to the Universe. My cousins could have been making it for the last 45 years back in Hungary, but I wouldn’t know about that. The recipe starts out “make a piskóta” and then lunches into cooking the pudding. Hungarian recipes tend to be outlines with certain guideposts, intended for cooks rather than for beginners. For instance, the pudding didn’t call for sugar, but I decided it needed it. I increased the cocoa too. As for not having any butter in the pudding… in the end I decided to stick to the original plan and it turned out great. Somehow, the three layers combined, the cake comes out delicious. I was surprised how good this simple cake turned out to be... I will surely make it again. 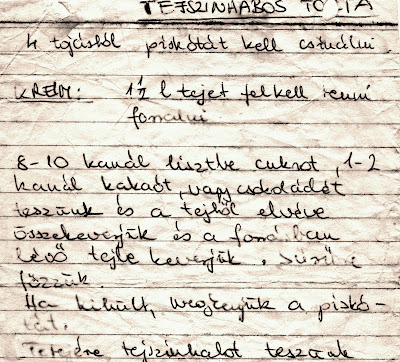 I used a round cake pan, but it will work in a square or rectangular pan too. Initially I thought the pudding will be too much, but in the end, it was just the right amount.

• Preheat the oven to 350F.
• Line a round spring-form cake pan with parchment paper.
• Beat the egg yolks and sugar on high speed for 4 minutes.
• Add the flour and beat to combine.
• With clean beaters beat the egg whites until stiff peaks form.
• Gradually very gently fold the beaten egg whites into the yolk mixture.
• Pour the cake batter into the prepared pan and bake until center gently tapped springs back.
• While the cake bakes, prepare the pudding.
• In a heavy pot, bring 1/2 cup of milk to the boil.
• In a mixing bowl combine the flour, sugar and cocoa and set aside.
• Start adding some of the hot milk to the flour mixture, whisking all the while.
• Add the remaining milk and transfer the mixture back to pot.
• Very slowly bring it to the simmer, whisking all the while.
• When the cream is sufficiently thick, remove pot from the stove.
• Cover the hot pudding with plastic wrap, and press it to the top so no skin will form.
• Let the pudding cool down completely.
• Remove the cake from the oven and let it cool in the pan. If you used a spring form pan, remember to cut around the edge before unhooking the spring mechanism.
• Pull out the parchment from under the cake.
• Close back the spring mechanism.
• Spread the chocolate pudding on top of the cake.
• Whip the cream to stiff peaks and spread over the pudding.
• Chill the cake for 3-4 hours.
• Open the spring mechanism, slide the cake over a serving platter and serve.