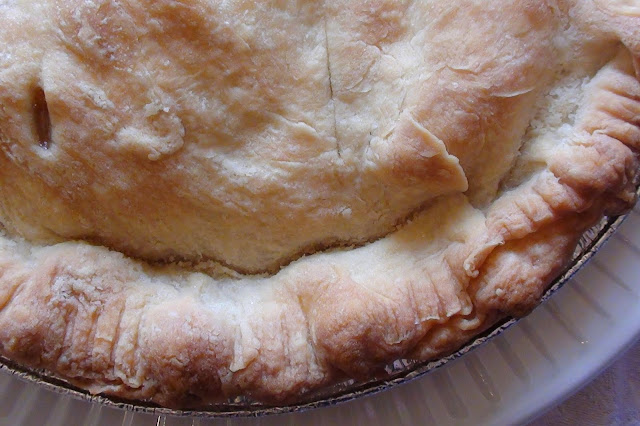 I used to call this the Mrs Walker Pastry, it was good, but over the years I made it even better. Once upon a time Mrs Marybell Walker and her friend Evelyn Jackson went to Seattle and there they both had great pie. Since they were from Canada, the owner of the coffee shop gave them his pastry recipe. The amount of water that was used was left to the imagination. One day I started adding eggs to the water, and I do mean eggs, because when you make a dozen of these pies you will need a lot of eggs. The last time I made pies I made nineteen.
So it’s a lardy recipe, but you needn’t to fall over. Instead consider for a moment that people used to cook with lard all the time and yet they were skinny. But these days we are health conscious and we exercise and we wouldn’t touch lard with a ten foot pole and yet most of us are overweight. Certainly, this is not because of lard, because Crisco stopped us from eating lard a long time ago. But lard is actually healthier than artificial fats, like margarine and shortening. If you don’t believe me, do a research on it. It’s quite a bit of an eye opener.
The other very different thing about this pastry is it’s not chilled and the ingredients are not chilled either. How it works is irrelevant, it just works. Try this pastry; you never had a flakier, lighter and better tasting pastry before this one. I for one find shortening based pastries heavy, no matter how much you chill that stuff.
1 cup lard
1/4 cup butter
3 cups flour
salt
2 eggs + cold water

• Cream the lard and butter.
• Blend in the flour and salt.
• In a measuring cup, beat the eggs slightly and add ice water to make 2/3 cup liquid.
• Combine the egg mixture with the flour mix.
• Recipe makes two pies comfortably and can make up to 5 pie crusts. For lattice pies, decorative pie plates and fluted edging you will need considerably more pastry.